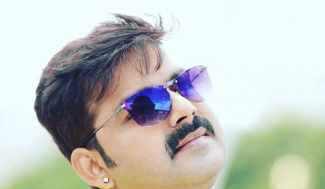 Pawan Singh is a 35 years old Actor, singer from Arrah, Bihar, India , who works in the Bhojpuri cinema. He is very famous in Bihar for his Bhojpuri songs and films.

Taking a look at Pawan Singh’s film journey, it was not easy to reach the glare of films after coming out of a small village farmer family. Pawan Singh achieved this position after a lot of hard work and dedication.

Pawan Singh started his journey as a singer and his first album was Odhaniya Wali which was released in the year 1997 and was very much liked by the audience.

After which he got a place in films in the year 2007 film Rangili Chunaria Tohre in which he acted as a lead actor. After struggling for many years in films, he got success and the audience also gave him a special place in their heart.

Although Pawan has sung many songs but his most famous song was “Lagaway Lu Jab Lipstick” This song is on everyone’s tongue today and you will get to hear it in every wedding party.

Some Unkonwn Facts About Pawan Singh