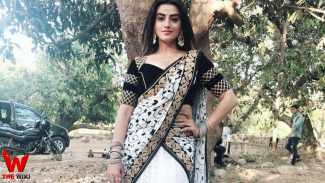 Akshara Singh started her film career with the Bhojpuri film ‘Satyamev Jayate’, which released in 2010 in this movie her co star is Ravi Kishan.

This movie brought him to the headlines of Bhojpuri cinema. Ravi Kishan in this movie. After doing this film, Akshara Singh signed action drama “Saugandh Ganga Maiya Ki”. Akshara received a lot of praise from this film.

After these movies she starred in 3 films ‘Diler’, ‘Hum Hai Banke Bihari’, ‘A. Balma- Bihar wala’.

Akshara is one of the big actresses of Bhojpuri cinema today. Millions of fan is crazy on their beauty.

After Mona Lisa, Sambhavana Seth and Amrapali Dubey, Akshara Singh is a name that has brought the Bhojpuri film industry to the international level.

Apart from acting in films, Akshara Singh is also a good playback singer. Her song “Jai Pagle Ko Dil se Chaha” has been watch by millions of people on YouTube.

Her pair with Pawan Singh in films, is very much liked. She is staring in Bhojpuri cinema from her acting, dance and singing skills. Akshara charges Rs 5 to 8 lakh rupees for a film.

Some Unkonwn Facts About Akshara Singh