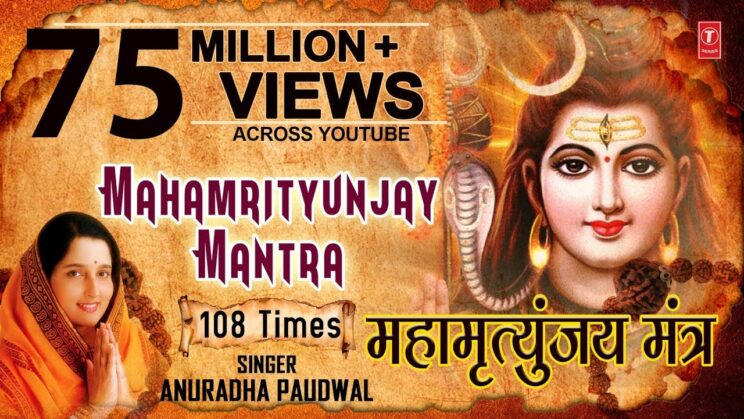 Maha Mrityunjaya Mantra lyrics in Hindi, sung by Anuradha Paudwal. The Song is written by Spiritual and music composed By Pankaj Bhatt.

Mahamrityunjay Mantra Story is associated with Rishi Markendeya who was the son of Markand. Markand Rishi’s Son Markendeya Rishi had Short Span of life. With Lord Shiva Grace he had become the master of scriptures.

Word by word Meaning of Lyrics

ॐ = oṁ = is a sacred/mystical syllable in Sanatan Dharma or hindu religions, i.e.
Hinduism, Jainism, Buddhism, and Sikhism (symbol of ultimate reality).
त्र्यम्बकम् = tryambakam, त्रि (Try=Three)+ अम्बकम् (Ambakam=Eyes)= “one who has three eyes” referring to Rudra or Siva who share the same attributes. (1) Firstly, in His “vishwaroopa” or universal form, the three eyes symbolically signify the sun, moon and fire. Sunlight during the day, moon at night and fire in their absence signify illumination. (2) Secondly, the pair of eyes give sight to the material world and its experiences. The third eye is symbolic of “atma-jnana” or knowledge of the Self through which one sees the higher reality. Kamadeva or Manmatha is the God of Desire perennially churning the mind and causing restlessness.
यजामहे=yajāmahe = We worship, adore, honour, revere you
सुगन्धिम् = sugandhim = sweet smelling, the fragrant (spiritual Essence). The fragrance The word in the mantra does not refer to physical fragrance, ie perfume but fragrance of character. Perfume emanates from a source and spreads to a reasonable distance. As such noble character spreads with warmth.
पुष्टि = puṣṭi = A well-nourished condition, thriving, prosperous, fullness of life.
वर्धनम् vardhanam = is one who nourishes, strengthens or restores (in health, wealth,
well-being); a good gardener.
उर्वारुकमिव urvārukamiva: उर्वारु, (Urvaaru=Cucumber) इव (Iva=Like, In the same manner)= like the
cucumber, here “urva” means “vishal” or big, powerful or deadly. “Arukam” means disease. Thus “urvarukam means deadly and overpowering diseases. The pumpkin or cucumber interpretation is given to show detachment. The diseases are those caused by the negative effects of the three gunas and therefore (a) “avidya” ” ignorance or falsehood and (b) “sadripu” ” a constraint of the physical body.
बन्धनात् (bandhanāt)=means bound down, Bondage [of Samsara or Worldly Life]’I am bound
down just like a cucumber (to a vine)’.
मृत्यु (mrtyu) = Death
मुक्षीय (mukṣīya) = Liberation
मृत्योर्मुक्षीय mṛtyormukṣīya = Free, Liberate us from the fear of Death
मामृतात् (Maa-Amrtaat): Liberate us from the death (for the sake of Immortality); मा (Maa) = Not, अमृत (Amrta) = Immortal

A little request. Do you like Maha Mrityunjaya Mantra Lyrics in Hindi. So please share it. Because it will only take you a minute or so to share. But it will provide enthusiasm and courage for us. With the help of which we will continue to bring you lyrics of all new songs in the same way.